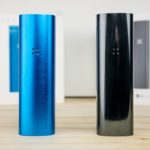 The Pax is a dry herb vaporizer made by the company Paxvapor. The first version of the original Pax vaporizer was released back in 2012 followed by the Pax 2 in March of 2015 and the Pax 3 was released in November of 2016. The OG Pax was an instant hit and still used by many to this day. The Pax 3 and Pax 2 vaporizers are no different.Although the size, shape, and overall design have remained the same, the … END_OF_DOCUMENT_TOKEN_TO_BE_REPLACED