The Prima is a conduction vaporizer made by Vapir which is the same manufacturer of the N02. The N02 is also a portable unit but not too many people would call it portable after getting it in their hands. The Prima on the other hand is a very portable unit.

Update: The Prima Vaporizer has been discontinued and no longer sold. Check out my updated list for the best dry herb vaporizers.

The design and durability stood out to me immediately and it has a very solid weight to it.

Loading the chamber is pretty easy, the battery is removable and the stainless steel vapor path is also removable for easy cleaning.

The Vapir Prima was rated an 8.8/10 scoring exceptionally well in design/durability and battery life.

This Prima vaporizer review will help you break down the features and help you decide if the Prima vape is right for you. 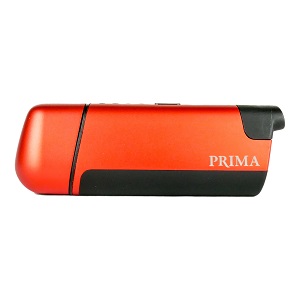 The Prima is about the same height as the Pax 2 with a little fatter body. It’s actually a very easy vaporizer to pocket and keeps concealed. The Prima dimensions are 4 ¾” H by 1 ¼” wide by 1 ¾” deep and weighs roughly 167 grams. The Prima is comparable in size to other popular vaporizers like the Crafty at 136 grams and the Haze v3 is around 180 grams but not quite as portable as the Pax 2 at 90 grams. Overall the Prima is easy to conceal and I can almost completely palm the unit for discretion.

The Prima comes with four different temp settings and all of the four settings have a temp range rather than a single temp. So temp one ranges from 350-360F, temp two ranges from 365-375F, temp three 380-390, and temp four ranges from 390-400F. I feel like the ranges are much more realistic because temps change depending on the herbs and loading type. Heat up times are about average ranging from 45-60 seconds depending on herb type, pack type, and temp settings.

The Prima uses a stainless heating element and offers a removable stainless steel vapor path. The Prima also offers the ability to vape dry herbs and concentrates which I’m finding more and more people want these days. A lot of people are looking for options and it’s nice that the Prima has the option to be able to vape different materials.

The chamber is huge. I don’t even want to fill it all the way and I’m a heavy user. This could be a super duper session vaporizer if you had 4-5 people in a group trying to chill and pass a vape around. So what I like to do is put one of the concentrate pads in the bottom of the chamber. This will take up about half of the chamber and allow for a more average session for 1-2 people. This does increase draw resistance slightly but just slow down your draws until you can’t really feel the resistance anymore and it will start to produce some dense clouds towards the end of the session. I can get about .15 grams in the chamber with the half-pack concentrate pad method and this works perfectly for 1-2 people.

So far the only downside that I’ve run into is that the herbs tend to get stuck in the screen protecting the vapor path but the Prima comes with a lot of cleaning accessories so I recommend just wiping out the screen in between sessions and this should help with your overall cleaning as well. Like I mentioned above, the vapor path is removable so the cleaning on that will be super easy.

The Prima is extremely easy to use. The power button is located on the front of the unit and to turn it on just hold it down for three seconds. Now the power button isn’t the best feeling. It seems a little loose in place and could be better for a $229 vaporizer. IMO. It just feels a little cheaper than the price warrants. In no way does this affect the unit but anyway, moving on. After the three seconds, you can select the temp by pressing the button one time for each temp. The Prima will remember your previous selection and automatically begin heating to the last temp. Holding the button down for three seconds again will turn the unit off.

Each LED will glow green as it reaches each temp setting. Prima will auto shut off after 5 minutes unless you double click the power button to extend the session for another 2 minutes before turning off. You can also check the battery life of the unit while it’s turned off by clicking the power button one time. Four full circles indicate a full battery and one empty red LED means it’s about to die on you.

I’ve found the Prima to be extremely easy to use as far as temp selections and overall use.

So far I’ve been really impressed with the battery life and Prima uses its own replaceable battery. The Prima battery is a Li-Ion 3.6v, 3200mhA and it comes with its own external docking station sort of similar to the Haze v3. The Prima charging dock can be plugged in via USB but you still have to lug around a docking station and place the battery in it. I haven’t had to opportunity to use it on a long trip yet so I’m not for sure how well the battery would stay in place in a backpack. For example, if you’re charging the Crafty via USB, it plugs directly into the unit and it’s charging. With the Prima, you have to remove the battery, plug in the charging dock to the external battery pack and then place the battery in the charging station. Basically, I wish they would have made a charging port on the actual unit to charge it via USB without having to remove the battery. Definitely, not a deal-breaker, and I’m probably just being picky.

The Prima has been lasting between 5 bowls on a full charge which is definitely above average and I think I might even be able to get more because I was doing burn-offs with the first couple sessions. I’m still doing more testing with the charge times but the average so far has been 100+ minutes to fully recharge from dead and you can NOT use the unit while it’s charging.

Prima vs other popular portable vaporizers

The Prima is definitely on par with the Pax 2 however it’s 50 bucks more expensive. It still has a couple of issues that are holding it back from being the best. The first is how much herb gets stuck in the screen after a session. I can just dump out a brick of herb from the Crafty or Pax 2 but I pretty much always have to brush out the screen after a session with the Prima. Again, not a huge deal breaker but that’s why it’s an 8.9 instead of a 9.0+. The Prima also will get a bit hot near the bowl after a long session, they do include a silicone sleeve to go over the hottest part of the bowl.

The portability of the Prima definitely puts it towards the top. It’s smaller than the Mighty and the Air but not quite as portable as the Pax 2 or Pax 3. The Prima also does fairly well in the battery life category. I’ve been getting around 5 sessions with the Prima before the battery dies.

The vapor quality is very decent for a conduction vaporizer. I would say it’s on par with the Pax 2 and the Goboof Alfa but not as good as convection units like the Crafty, Mighty.

The Prima came with a lot of accessories and cleaning tools which is nice especially if you are going to be using it with concentrates. They literally thought of everything that you would need to remove pieces, clean screens, and to maintain the vaporizer. You also get a cool little scooper which makes loading the chamber super easy. I’ve been using it with all my other vaporizers now too lol.

The Prima comes with a 5-year warranty covering defects and a 2-year warranty on the battery which is just awesome. No one covers batteries in this market for this long. Vapir offering a two-year warranty here is a pretty good testimonial to the quality of their batteries. I’ve personally never had to return a Vapir product so I haven’t had to work with the customer service department but I guess that’s a good thing. Let me know if you guys have any experiences with Vapir in the comments below.

Summary: Should you buy the Prima?

Yes especially if you’re thinking about possibly vaping concentrates. The Prima is a very good vaporizer and MUCH more portable than the previous N02. I didn’t mind the N02 but that thing is a large dinosaur at this point. The new Prima has all the features of most of the popular portable vaporizers out right now plus you get a long-lasting battery, removable stainless steel vapor path, and the ability to vape dry herbs/concentrates.

You also get a 5-year warranty and again… 2-year coverage on the battery. Battery problems with heavily used portables vapes are not that uncommon and knowing the Prima has a good system set up is nice. If you want to purchase a second battery, they are pretty expensive at $50 apiece, but I honestly think most people won’t need it unless they are going to be using it rigorously over the course of a day.

Thanks for checking out my Vapir Prima vape review please leave a comment below with any thoughts or questions you have.[/one_half][one_half_last]