The market for vaporizers under $100 is really taking off and now it seems they are in a competition to come up with the best cheapest vaporizer overall.

Here enters the GPEN Dash Vaporizer. The Dash is a dry herb portable vaporizer made by the company G Pen. It’s one of the most basic vaporizers on the market but with the lack of all those features comes simplicity. Something that I feel is forgotten in today’s “one feature better” product world.

While the GPEN Dash is not a contender for the best portable vaporizer, it’s most definitely a great entry-level and/or budget-friendly option for someone just entering the vape market.

As I mentioned above, the Dash is a dry herb portable vaporizer meaning it will only vape dry herbs. It doesn’t get hot enough to vape wax or concentrates and it wasn’t made for it.

For now, it looks like the Dash vaporizer is only offered in black but knowing GPen they will probably come out with some new colors in the future.

The Dash retails for $69.96 and I’ve seen it as low as $49 which makes it one of the cheapest dry herb vaporizers on the market that I recommend.

The GPEN Dash vaporizer is straightforward as far as components go. It consists of a durable aluminum alloy body and a magnetic mouthpiece. I like the magnetic lid quite a bit and I haven’t had any issues with it coming off in my pocket or during activities.

The Dash vaporizer uses an internal non-replaceable 950mAh battery which is pretty small, but you can’t really complain when you get a vaporizer that fits in the palm of your hand.

During testing, I’ve found the Dash to average about 30-40 minutes of continuous use. This is equal to about 5-7 bowls and it will take roughly 60 minutes to fully charge the Dash via a micro USB charging cable.

The average battery life on the Dash impressive for its size and will last you for a night on the town, a half-day adventure, or just a quick walk with the pup.

I would not be taking it on full-day adventures especially if you are planning to use it in group scenarios. The Dash is can be used with multiple people but back-to-back bowls will kill the battery life quickly.

The Dash heats up extremely fast. I’ve been averaging around 15-20 seconds to get to temp and the session has an auto-shutoff timer set to 5 minutes. Haptic feedback is also included with the Dash and helps to remind you when the vaporizer is set to temp.

How to Use the Dash

First and foremost, I always recommend to fully clean everything with Isopropyl Alcohol and do a burn off for a couple of sessions at max temp. A burnoff is when you set the vaporizer to max temp and draw in from the mouthpiece but don’t inhale. Similar to smoking a cigar, just exhale immediately.

Operation: Turn on the Dash by pressing the control button five times on the front of the device. The vaporizer will automatically begin heating up to your last set temp and show your battery life by indicated 1, 2, or 3 LEDS on the front.

The colors indicate temp, blue being the lowest at 375F, Green is 401F and Red is 428. I’ve been using it most at Green which is the 401F and after a 5-minute session, I will bump it up to the red to finish up the bowl.

Grind Recommendations: The Dash works best with a medium to fine grind because the chamber is so small. One of my favorite features of the Dash is the design of the chamber. It’s basically a funnel forcing all the herbs down into the chamber which makes loading bowls very easy. Check out my list for the best weed grinders.

The one thing it does not come with is a stirring tool. I use a stirring tool (from the AirVape XS GO) with this vape because it’s a pure conduction vaporizer and it doesn’t heat the top of the bowl very well. So stirring after a few hits helps break up the chamber and achieve a more even heating of your herbs.

I was actually very impressed by the quality of the vapor with the gpen Dash. The vapor is relatively cool for how short the vapor path is but the mouthpiece does get hot with prolonged use.

Draw Resistance: The other thing I was impressed by was draw resistance. I thought it was going to be a lot worse than it is but if you give it a stir or two during a session, the Dash is pretty free-flowing. It’s definitely not as free-flowing as something like the Crafty+ vaporizer but not bad overall.

The biggest thing to help with routine maintenance is to clean out the chamber immediately after a session. It helps to use a little brush to get out the smaller particles. Leaving herbs in the chamber will cause it to gunk up the holes in the bottom and cause the screen to get dirty quicker as well. This will result in bad draw resistance when it gets too dirty.

A full cleaning will consist of removing the screen from the mouthpiece housing and throwing it in some ISO. You can also remove the vortex spiral ring thing from the vapor path and clean that with ISO as well.

Last, you’ll want to put a small amount of ISO on a Q-tip, turn the vaporizer upside-down (chamber facing down), and swab out the chamber. Make sure everything is completely dry before using again.

I would say the entire process to clean the GPEN Dash takes less than 5 minutes and the biggest thing is to make sure and keep that screen clean to reduce draw resistance.

Who is the GPEN Dash for?

The Dash is the perfect dry herb vaporizer for someone just entering the vape market or for someone looking to find out if vaping is a good alternative to combustion without having to break the bank. While this vaporizer isn’t the best of the best, it absolutely works and works well considering the $69 price tag.

The DASH is NOT for someone that is a heavy user or needs something to work well in group scenarios. This is a great single-person vaporizer that can accommodate a friend now and then but is not meant to be used all day every day with a bunch of people.

I recommend this vaporizer for a few sessions around the house or something like a quick 20-minute walk with the dog. This is not a lung-busting vaporizer to get you heavily medicated.

With that said, I think it’s a great dry herb portable vaporizer for the price and if you are thinking about going with the GPEN Dash, I recommend picking it up from my authorized retailer here or directly from GPEN.

Thanks for taking the time to read my GPEN Dash vaporizer review and hit me up in the comments below with any questions about the dash vape or anything else. 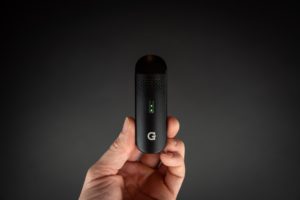