Hey guys I wanted to do a quick little overview of the two new portable vaporizers from the company Storz and Bickel. The Crafty and the Mighty. This is the same company the makes the Volcano and the Plenty plug-in type vaporizers.

Update: This article was published when the OG Crafty and Mighty first came out. Since then, Storz and Bickel released the Crafty+ Vaporizer which offers some good upgrades over the original.

Here are a few more up to date articles to get you heading in the right direction: 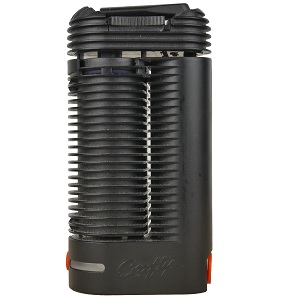 So the first of the two and the less expensive unit is the Crafty. The Crafty is the lighter, smaller brother of the Mighty. You can buy the Crafty for $279.

It uses mostly convection and some conduction. The temp settings are controlled via an APP that is available for Android and iOS smartphones.

With the app, you will be able to adjust two pre-set temp settings, the “default” and “boost” temps. From there, all you have to do is press a button to turn it on and the unit will automatically heat to your desired temp. Once it hits the pre-set temp, it will notify you via a green LED and slight vibration. Double press the button to get the boost temp mode.

The Crafty only has one button so it will be pretty easy to operate. The top part of the unit removes to reveal the chamber and it also stores the mouthpiece when not is use. It’s powered by one lithium-ion battery which is one less than its big brother Mighty. 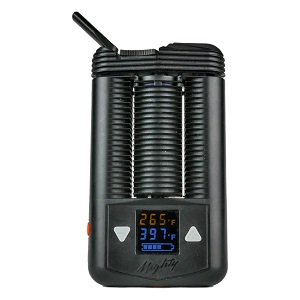 The Mighty is the bigger unit and with the $70 price increase comes better battery life and a display on the unit where you can use buttons to adjust temps. This is almost identical to the Volcano desktop idea with one being a “classic” model and the other being the “digit” digital display model. With a little bit less of a price difference, you can buy the Mighty for $349. This time the biggest difference is more size, which isn’t something that a lot of people want in a portable vaporizer. After all, it’s a con for Firefly 2+ which is smaller.

Based on dimensions the Mighty is about the same size and weight as the Solo which makes it one of the largest portables currently on the market. It doesn’t have any glass stems to tote around though.

The Mighty uses an LED display with plus/minus buttons to adjust the temperature. You can choose any temp from 104F – 410F. I’ve heard a few people with the unit wish the temp would go a bit higher but i’ll have to check it out myself when I get it.

Check out the full Mighty vs Crafty+ Comparison for more info.

The Mighty comes with 2 li-ion batteries. This seems to be like one of the deciding factors between the two vapes. When you’re spending $279 on a portable vaporizer… a lot of people might want to spend the extra $70, get double the battery capacity, and the display. Another thing I noticed about the batteries in the literature was that the Mighty can draw 36 watts of power while charging, while the Crafty can only draw 10 watts of power. It will be interesting to see how the recharge time compares since the Mighty can draw considerably more power while charging, but also has to charge double the capacity.

The Mighty heater can output 30 watts, while the Crafty can only output 27 watts. I will be curious to see if that makes any difference in pre-heat time, or vapor quality once I get my hands on them.

Now I feel like the other deciding factor will be the size. Based on dimensions, the Crafty is similar in size to the Ascent but lighter than most. The Crafty weighs 135 grams. The Pax weighs about 96 grams, the Ascent weighs about 192 grams, the Mighty weighs 230 grams and the Firefly comes in heaviest at about 240 grams. So basically, if you care about discreetness, you might be looking at the Crafty.

The temp settings are a bit different on each. The mighty offers an LED display with plus and minus buttons which is very similar to that of the digital Volcano version. This gives you access to a full spectrum of temps whereas, with the Crafty, you only get to pick 2 temps which can be changed on the app. I’m wondering if there might be a way to adjust it from a PC as well?

Both units use “hot air convection” with a little conduction to help heat the chamber in the beginning.

Overall, I’m very excited to get my hands on these two portables. I knew they had to be working on something for a while. I’m hoping the guys over at Paxvapor are taking note and release something a little bit more friendly to our wallet. Maybe convection? Probably just wishful thinking though.